Investigating what it is to be a subject or object from different social standards’ view, I explore the notion of the term ‘being foreigner’ and ‘local’ as a tool to connect the question of autonomy of cultural selfhood and owning a body. Seeking various definitions of ‘foreignness’ while different cultures collide, the platform of which these phenomena are shown discretely is one’s body. To be exact, a body as a landscape of authenticity becoming foreign matter, and on the other side of that landscape, the survival of such authenticity against foreign invasions such as viruses or medical drugs. Biological system is under constant update and evolves into each new versions, creating new features through hybridisation and re-positioning. But though on the other view, who can say that the germs, viruses and the city are just ‘new’? Those might have been anchored there for a very long time, and the foreigner’s body could be the new object for them. I would say this ping-pong is actually the matter of where to position or to be positioned. But how relative this is, I still regard ‘the foreignness’ as a singular element that have a power to deconstruct and regenerate the value of the existing system.

As much the body of anonymous character I created within the works is important, I care about the audiences’ body to stroll around the installations as well. Their bodies are substituents of ‘someone’ who might have been there already, or perhaps the one who might hold the space. By stepping in the installations, they breath the same air, hear same sounds and exist in same place but in different time. Building up this strange co-relation with the work and the audience is to provide experience of a transitional moment, a displacement that entails both empirical level of fragmented subjectivity crisis and theoretical discourse of loss and gain.

Based on the part fictional, part self-projecting script about female protagonist, I would like to develop the details of such narrative, herself as a foreigner in a new society. The last installation is about her private residential place, composed of ‘Aseptic Sanitising Room’ and ‘Loosened Space’ that shows her obsession of observing and sanitising her body. It was a prologue of both protagonist’s character and the outline of the script, starting from her very first step of migration and discovering how she ‘looks’ different from the locals. During my stay in GlogauAIR, it will develop further from her doubt of her body (finding hard to accept her own difference) but slowly accepting it by various illnesses and gazes of Others that she never experienced in her home country – as if updating her physicality and immune system into hybrid version after each disease and input of new drugs.

There would not be much limits of media to describe various circumstances that the protagonist faces. But some of the first are mobile objects and sculptural installations indicating her nomadic life. Mobile object would contain her personal belongings and medications from her country, and the process of how these got destroyed and replaced with new items in the new city. Details of the shape of mobile object is undecided, but I wish to develop in GlogauAIR through discussions with other artist in the residency by interviewing them about any similar experiences and projecting myself into accustoming in Germany. Especially the first three to six months are supposed to be the golden time of settle-down, figuring out how protagonist from the fiction and artists in the residency locating themselves in between former system and new rules in new place.

Another proposal is a publication or an artbook presumed as the protagonist’s travel documentation. This is rooted from my previous attempts of making book art works out of my travel photographs and texts, while this time it probably would be developed into proper publication merging my experience and the protagonist’s. A mixture of images during her journey, her current residence and psychological status, texts and diagrams from her sanitising and medication routines, observation of her body and the others’ gaze upon it would be the main theme of the publication.

Lastly, a group discussion about wounds and how we take care of them would be held beforehand a workshop of learning ‘How to Sanitise properly’ at the end of the residency.

If anyone has been aware of:
1) how blood gushes out under the skin,
2) how much it hurts when we slightly pressure the wound to stop bleeding because we think it’s abnormal (or even dangerous) to lose blood,
3) what kinds of antiseptics we use to disinfect the wound, and how this actually differs according to regions and culture,
4) how surprisingly new flesh grows every single day,
5) the pharmaceutical chemicals creating a system of self-defence and how independent you are from the pills or creams,
then this is the moment for anyone to voice up.

Inviting artists within the residency and some local residents, the group will talk about their any possible fear of new illness that their immune system has not experienced. Perhaps if any of them has been abroad and gone through objectification, losing any type of autonomy, or contrarily, too much fantasied by their differences, all could be a good topic to speak with. This could be a chance to consider what is the standard of categorising ‘different’ people in various countries and cultures, and how it is in mainland Europe.

I would like to develop on a perforative workshop for the group to take part in about digesting the difference of sanitisation and disinfection, the function of it, how to do on different parts of body, and create a performance on trying the steps of sanitising on a mannequin.If anyone wishes to try on their own body, that is also recommended. Afterwards, participants can collect and make a sanitising and first-aid kit of their own among the pharmaceutical products and small objects I and the other artists made during the residency (I will ask the artists to produce any kinds of artistic pieces like drawings, instructive cards, prints, or objects that fits their own practice) to not just thank the local residents but to enhance symbolic result of the whole workshop.

I’M NOT YOUR DREAMS OR IMAGINATION, Lewisham Arthouse, London, UK 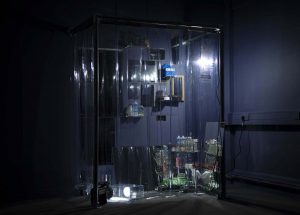 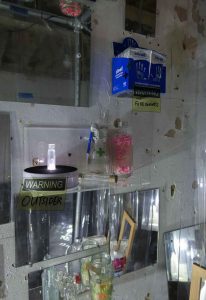 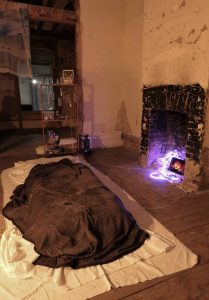 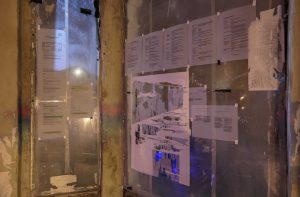 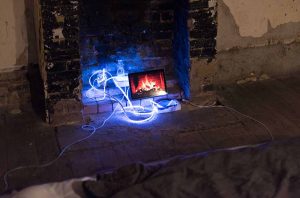 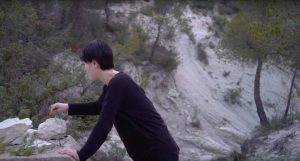 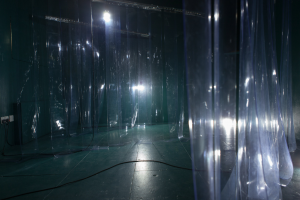 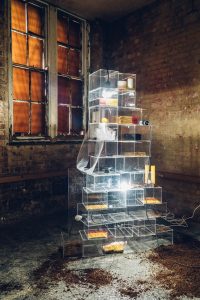 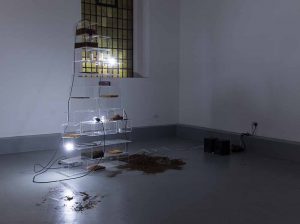 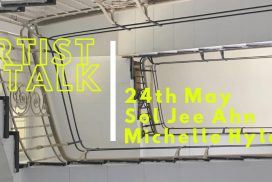 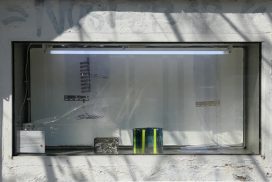