In my work, I move along the shifting line between the random and the structured, revealing different facets of my preoccupation with the powers and handicaps of perception. From two-dimensional works such as painting and photography to sculptural mirror works and film/video, I work with a variety of techniques to make visible not only the constructed nature of imagery but also the potential to change them. Each of these works has a secret twist. The tension between what we initially notice and what is actually there resonating through our encounter.

My upbringing in Germany and my time spent in America have afforded me the possibility of parsing a nuanced presentation of media images in today’s society. In the United States, I have been collecting Data, Magazines, re-photographing images from media, creating detailed close-up shots in Photography and Film, documenting my daily environment. During the residency at GlogauAIR I intend to re-visit my old neighborhoods in Berlin and document the city in Photography and Video.

As an artist, I am interested to investigate how the image is influencing our existence while at the same time I hope to question our media image driven society. Flashes of information, sensations, details, playing with the known and un-known of images and memory in Time and Space. As an end result I imagine a multi layered installation with enlarged detailed photographs and projected video images, scenes… creating a virtual field that connects to an intuitive feeling rather the reading of context.

In my artistic practice during the residency, I hope to further explore the boundaries of ‘image making’, abstractions combined with fragments of reality as well as I often also experiment with reflections, mirror elements and illusions so that the viewer questions the so-called reality and experiences a Kaleidoscope of impressions. The reflective elements such as transparent layers of plastic or Glass as well as mirror like surfaces interact with the viewer’s perception, and the layers of Glass and mirror elements are also simulating our daily interaction with screens from i-phones, computers, etc, raising further questions about illusion and reality – an original and a copy – describing an awareness between the existing conditions and a fictional environment.

In the present age, almost all aspects of our surroundings and our lives are recorded every second. The obsession with collecting data has long gone beyond the limits of our planet. Yet we still need our eyes to evaluate the collected flood of data! It is precisely in this tensional field of trusting our own observations that I plan to create visual echoes and poetic narrations.

Isolde Kille is an interdisciplinary artist working primarily in painting, photography and video. Born in Welver, Germany, she studied visual communication at the art academies in Berlin and Dresden, finishing her studies with a master’s degree in fine arts (Meisterschüler) at the University of Arts in Berlin, Germany.

As a graduate student in Berlin, Kille was involved in several independent art initiatives, including 241, an art ‘fanzine’ named for the room number in which she and her fellow students developed the project. Intended as a forum for the burgeoning art scene of Berlin, 241 helped launch Kille’s career, gaining her the attention of galleries, collectors, and curators in Germany. Most notably, 241 brought Kille into dialogue with high profile members of the international art community, which inspired her to travel to New York. Feeling more creatively liberated in the United States, in 1998 Kille made New York her home, and embarked on a productive period that would mark her maturation as an artist.

The artist’s Cosmic Series include her earliest mature works to demonstrate this tension of perception. These black and white paintings use various painting techniques to mimic celestial phenomena: some employ abstract expressionist effects, which, contrary to expectation, have a
photographic illusion from a distance; others reject the painterly brushstroke to create neutral images of the serene static of the Universe. Works from the Cosmic Series were included in the artist’s first group show in New York at John Gibson Gallery in 2000. Kille continued to explore perception and reality in multiple media: she broke mirrors “to break away from superstition,” only to reconstruct them into a new broken reality; she created large photographic exposures called “rayograms,” honoring her own art historical lineage to Man Ray and Moholy-Nagy; she created ink washes that balanced a persistent inquisition of concepts of time, space, and self, within ominous, Rorschach-like dual dimensions.

Throughout the first decade of the 21st century, the artist enjoyed consistent exposure in galleries throughout New York, although she increasingly felt a need to separate herself from what she described as the “sensationalism” of the New York art market. In 2009 the artist moved to a Zen center, living in the Buddhist community for thirteen months. During this incredibly focused time of self-reflection and meditation, the artist was “free of the pressure of the market and at the same time continued my interest about Time, Space, and Existence.”

The resultant body of work, which includes photographs, drawings, and video documentation, is far more introverted than her previous pieces, with a more concentrated interest in nature, the body, and the relationship between the two. In a video documenting drawings made from stenciling her own body, the artist acknowledges the influence of Haiku poetry, which is an art more of “showing” than “telling.” Kille’s self-isolation from the art market was a fruitful and inspiring experience. Ultimately, she decided to follow in the footsteps of other artists and curators in her circle and moved to Santa Fe in 2012, where she still resides today.

Her current work still explores perception and our relationship to reality: in the series The Definition of Abundance, “close up” photographs dissolve into high-keyed abstractions of color and light; in Under the Moon, enamel paint, iron dust and silver nitrate produce otherworldly images, their painterly strokes in tension with the glossy alchemy of its media. These works elude easy definition —indeed, the artist herself seems loathe to offer a clean explanation, preferring morsels of intangible insight: “Our world is saturated with depth illusions. Actions are plotted by pictures on screens for places we have never even seen or sensed. Our bodies have become disconnected from all kinds of processes, we have lost our bodies as places of knowledge. Stuck behind surface, we are filled with illusions what we have mastered matter. Instead its definition keeps slip-sliding away.” Isolde has shown domestically and internationally at venues such as: Kunstwerke and Kunsthaus Bethanien in Berlin, Germany; John Gibson Gallery, John Weber Gallery; Lital Mehr Gallery, Chelsea, New York, NY; Bass Museum, Miami Beach, Florida, among others. 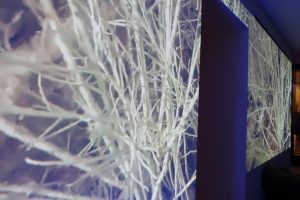 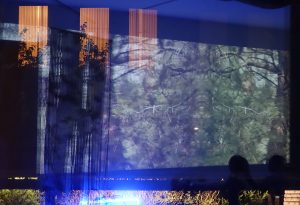 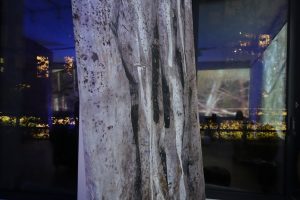 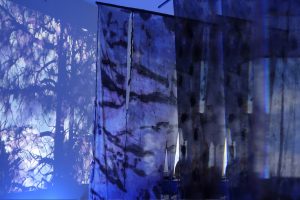 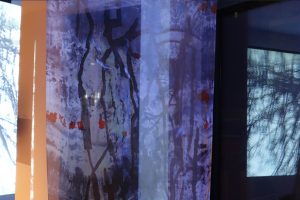 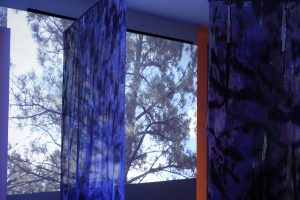 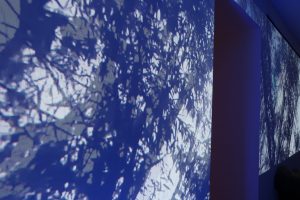 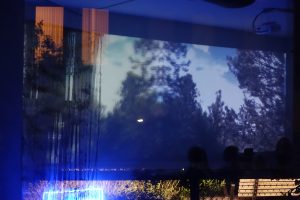 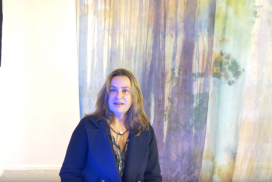 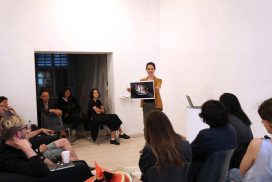 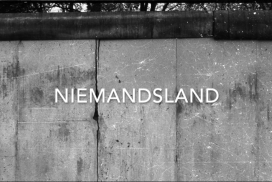 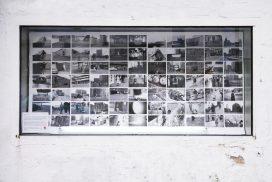