Meghan Marie Malar’s art practice is deeply informed by her sojourn in a Californian Zen monastery following her disillusionment with the machinery of Hollywood, where she trained as a filmmaker. Her artworks, bearing the mark of this influence, are sites of restraint and intense curation.

Meghan strives to condense lived experience into a simple form, guided by the thought of creating moving image pieces that feel like stones gently chiselled by water. She is particularly interested in dream-like imagery, allowing, through time for idleness and daydreaming, space for her interior life to come mysteriously to the surface.

Through her six-month residency, Meghan sets in motion”Gesturals” a textual and moving-image-based exploration of gestures anchored in the sacred. She investigates the ritual practices of France and Malaysia, her homelands, to create an image repertoire reflecting her inner topography.

What is your name and where are you from?

When/ how did your art practice begin …. Do you think where you are from has affected your work?

For me, a slight removal from the world and a keenness to watch it from the periphery crystallised into an artistic gaze long before it did into an artistic practice. In some ways, I feel that my artistic practice is only beginning now. For many years, I was mostly paying attention to the world around me : writing things down, reading, dreaming. The desire to externalise images I had in my mind led me to cinema, which seemed the most immediate way to communicate my interiority. Since then, the need to translate an inner topography has taken on different forms : writing, performance, and now sculpture.

Immediately, my work was deeply informed by the French countryside in which I grew up : the wide landscapes and open skies, the reigning silence, the early, formative encounter with Catholic imagery. The denseness and humidity of Kuala Lumpur, where my mother is from and where we spent our summers, was also deeply influential; the heat of the sub-equatorial climate fostered an affinity for languor and daydreaming. Lately, I begin to explore more closely the imprints of this dual heritage, in order to eventually create an image repertoire that fuses them and is unique to me in that respect.

How has your practice changed over time?

My practice has moved across mediums, fluidly adapting it to my circumstances. I worked primarily in fiction filmmaking when the resources were there, then in writing and essayistic video when I was moving from one city to another and had become quite solitary, and currently, with more space, time and stability, I begin wanting to make material objects, that feel permanent and tangible.

The themes I’m drawn to also shift: I was deeply interested in the narrative possibilities of first-person cinema a few years ago. Now, my curiosity lays in examining my roots and their spiritual traditions to create moving images that contain something of the sacred. My time in a Zen monastery also marked a considerable turn in my practice. I began to want to do away with superfluity, and make work that feels true and exact.

Do you think your art has evolved being a different environment E.g. Do you think GlogauAIR / being in Berlin has influenced your work?

GlogauAIR altered my artistic practice in that having a studio space for the first time enabled me to begin reaching beyond video – my primary medium for the better part of ten years – to play with sculptural forms. Becoming drawn to material was the perfect antidote to the film frame, which had begun to feel claustrophobic, and is helping me grow into a more well-rounded artistic practice.

What are your next plans after your residency?

After my residency, I plan to complete work on “The Pearl and The Oyster”, a short film I shot in September. I additionally intend to organise an exhibition showcasing video, sculptural and installation work made at GlogauAIR and in the past few years 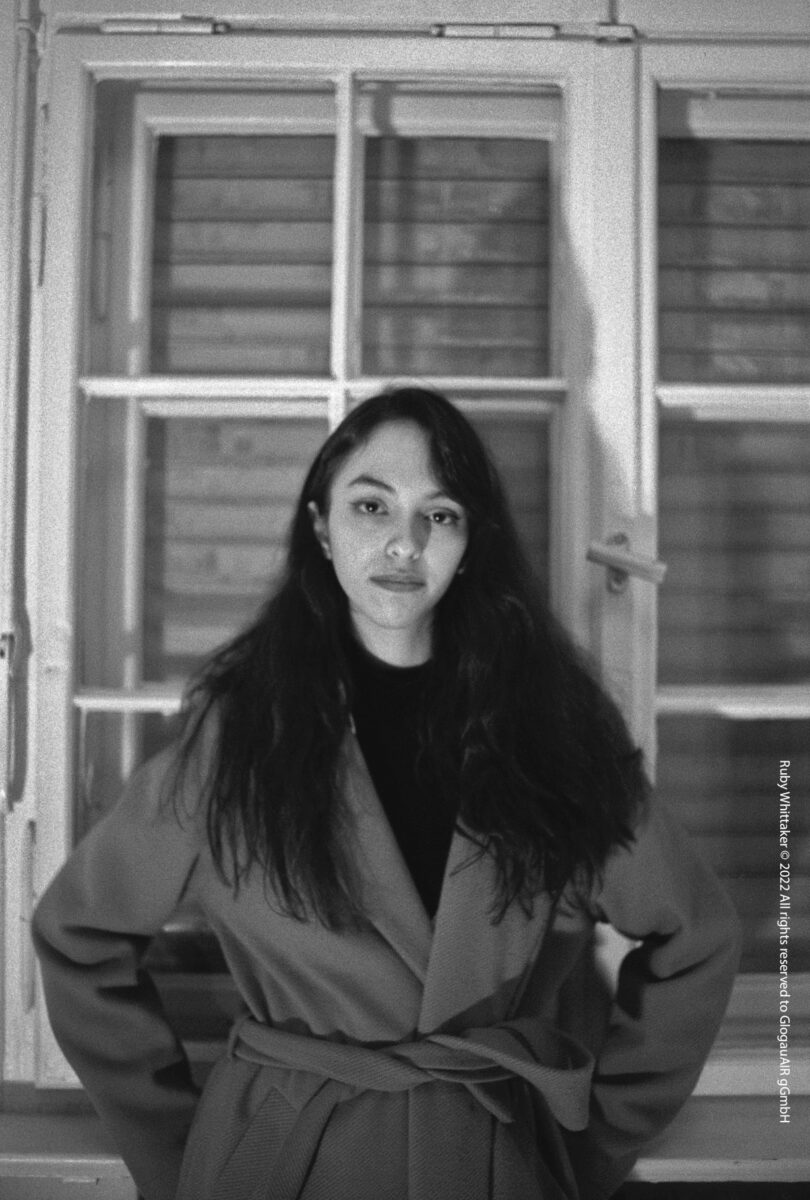 One Swallow Does Not Make a Summer