Julia Edith Rigby lives and works in California. She is an artist who thinks about climate change, environmental relationships and acoustic ecology. Her work explores perception, sound and ways of co-creating with nonhumans and natural processes.

While in Berlin Julia plans to continue making work that offers viewers a multi-sensory experience to explore perceptual environments and ecosystem relationships. The work will position the viewer/listener as a performer, inviting us to explore perception and relationships between humans and non-human systems, to engage sonically and challenge the ways we experience the world.

What is your name and where are you from?

When/ how did your art practice begin …. Do you think where you’re from has affected your work?

I think that growing up in California has been profoundly influential on my work. My work deals a lot with climate change and environmental relationships, and California has been undergoing massive shifts in climatic phenomena for the past three decades that I’ve been on this planet. We now have to contend with unpredictable firestorms and an unpredictable fire season that lasts all year long, and a lot of my art talks about this. California is also a site of incredible ecological diversity, and growing up adjacent to an ecotone-the Pacific Ocean–has been a large influence on my thinking process and artistic research.

When / how did your art practice begin …. Do you think where you’re from has affected your work?

My practice has shifted more from physical sculpture to sound sculpture over time. In grad school I was doing a lot of welding, finding scrap metal at my local trash dump and welding found metal drums into these large outdoor installations. I did alot of heavy wood working after that, big works with found wood and chainsaws. I was really interested in working with the waste stream, with the movement of matter circulating around the dump. And I was working alot in various metal shops and wood shops. Now my studio practice is more field-based and less shop-based. I spend alot of time in the field gathering audio recordings for experimental compositions. I also spend my time thinking about the potentials of sculptures to communicate sound, as well as the potentials of sound to become sculptural.

Do you think your art has evolved being a different environment E.g. Do you think GlogauAIR / being in Berlin has influenced your work?

Working in the GlogauAIR building has made me think a lot about caves. I keep finding caves in this building–in the ceiling of the stairwell, in the back of the attic…and this is making me think of my work with sea caves back in California, and the potential for caves to act as resonant structures with unique acoustical architectures. I have been researching the building’s interior caves and transposing documentation of this sea cave onto these various sites in the building. With the staircase, gravity is subverted; the cave of the ceiling becomes a portal to the sea cave’s mouth. The two sites—sea cave and staircase–enter into a co-evolutionary relationship, transmogrifying visually and acoustically. In our witnessing of this coevolution, we too are drawn into a reciprocal relationship with the work. And that makes me think, what happens when this relationship is brought into conversation with the street? The work becomes haptic, subject to viewer engagement and collaboration, for instance via shadow interaction or auditory interaction. What happens when the viewer transmogrifies to performer?

What are your next plans after your residency?

I was just notified that I have been accepted to a residency at the Bemis Centre for Contemporary Arts for 2023. In the meantime, I will keep making sounds and sound sculptures! 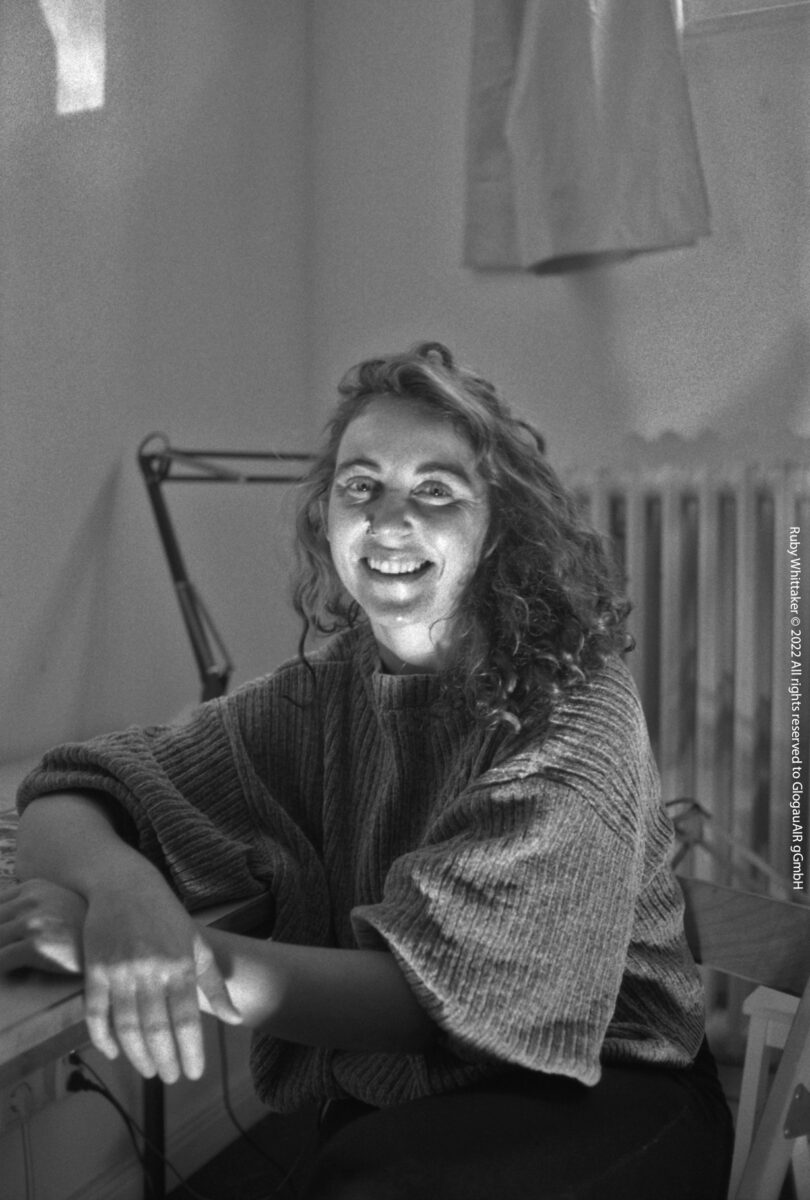