How to be in solidarity when there is no possibility of being solid or whole? I will tell two different tales of solidarity, one linked to a museum as a counterpropaganda campaign, rumor as a the poor’s bomb, a call to artists to bring in their work as support structures for the Third World. The second, on the use of storytelling as a way of articulating a language to fight against the systematic warfare of enclosure, a tale involving a group of animals from the jungle unjustly confined in a city zoo. Both tales come out of the tumultuous seventies in Latin America, they are intertwined by political prison, exile and the beauty of life occurring amongst and despite all the brokenness.

María Berríos (born 1978 in Santiago de Chile) is a sociologist, writer, independent curator, and cofounder of the Chilean editorial collective vaticanochico. Her work traverses art, culture, and politics with a special interest in the collective experiments of the Third World movement and their exhibition formats in the 1960s and 70s. She teaches and lectures regularly in Europe and Latin America and has published extensively on art and politics in Latin America and beyond. Among other projects, Berríos curated with Lisette Lagnado Drifts and Derivations. Experiences, journeys and morphologies on experimental architectural collectives from Chile and Brasil (Museo Nacional Centro de Arte Reina Sofía, Madrid, 2010), curated Nuestro desconocido, nuestro caos, nuestro mar (Museo Experimental el Eco, Mexico City, 2014), and Alberto Cruz: El cuerpo del arquitecto no es el de un solo hombre (together with Amalia Cross, MAVI – Museo de Artes Visuales, Santiago de Chile, 2017). Berríos has been engaged in several collaborative art projects, including The Revolution Must Be a School of Unfettered Thought (together with artist Jakob Jakobsen for the 31st Bienal de São Paulo, 2014). She is an ongoing collaborator of the Hospital Prison University Archive (Copenhagen, 2016–to date), a project space and radio station run by artist Jakob Jakobsen in the building where he and Berríos live together with their four-year-old son Teo, who believes he is a ninja. In 2018 she was appointed, together with Renatta Cerveto, Agustin Perez Rubio and Lisette Lagnado, as curator of the 11th Berlin Biennale. 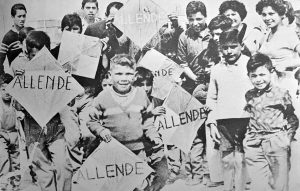