GlogauAIR is a nonprofit organisation founded in 2006 by Chema Alvargonzalez as a meeting point to provide international-artists in multiple disciplines the opportunity to develop their artistic practice in the city of Berlin.

Activities take place in Chema's former studio building in Berlin Kreuzberg. The word GlogauAIR comes from the phonetic combination of GlogauerStrasse; the name of the street where it is located, and its purpose; an Artist in Residence program where artists can develop their own journey in the city of Berlin; a pioneering metropolis for contemporary global culture. 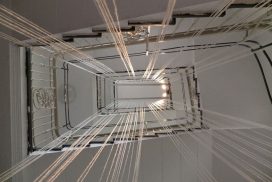 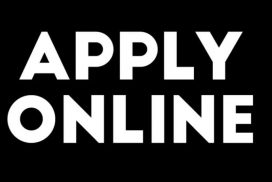 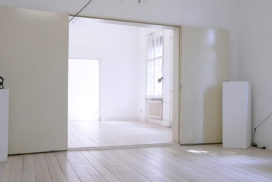 The residence is located in a beautiful, modernist-style building which was originally designed to be a school. The building was one of the first projects erected by architect Ludwig Hoffmann in 1896, during his time as the Building Adviser of Berlin.

With this structure Hoffman initiated a period of non-stop productivity that led to public buildings, parks, bridges, hospitals and museums being built throughout the city of Berlin. The most famous are the Pergamon Museum—a responsibility he took up after the sudden death of his friend Alfred Messel—the Märkisches Museum and the Town Hall of Berlin.

During Allied bombings in 1945, the principal building of the school was destroyed but the other areas of the gymnasium remained intact and today lodge a children’s public library.

Another part of the original buildings which survived is the rector’s building, which preserves the educational spirit while serving as our Artist in Residence lodging today. The building is listed under Denkmalschutz (cultural heritage protection) and is located in the district of Kreuzberg well known for its rich alternative artistic scene. The old classrooms of the building have been converted into studios and the destroyed space of the former building has been turned into a green space and courtyard, allowing lots of light and room for relaxation and outdoor activities. 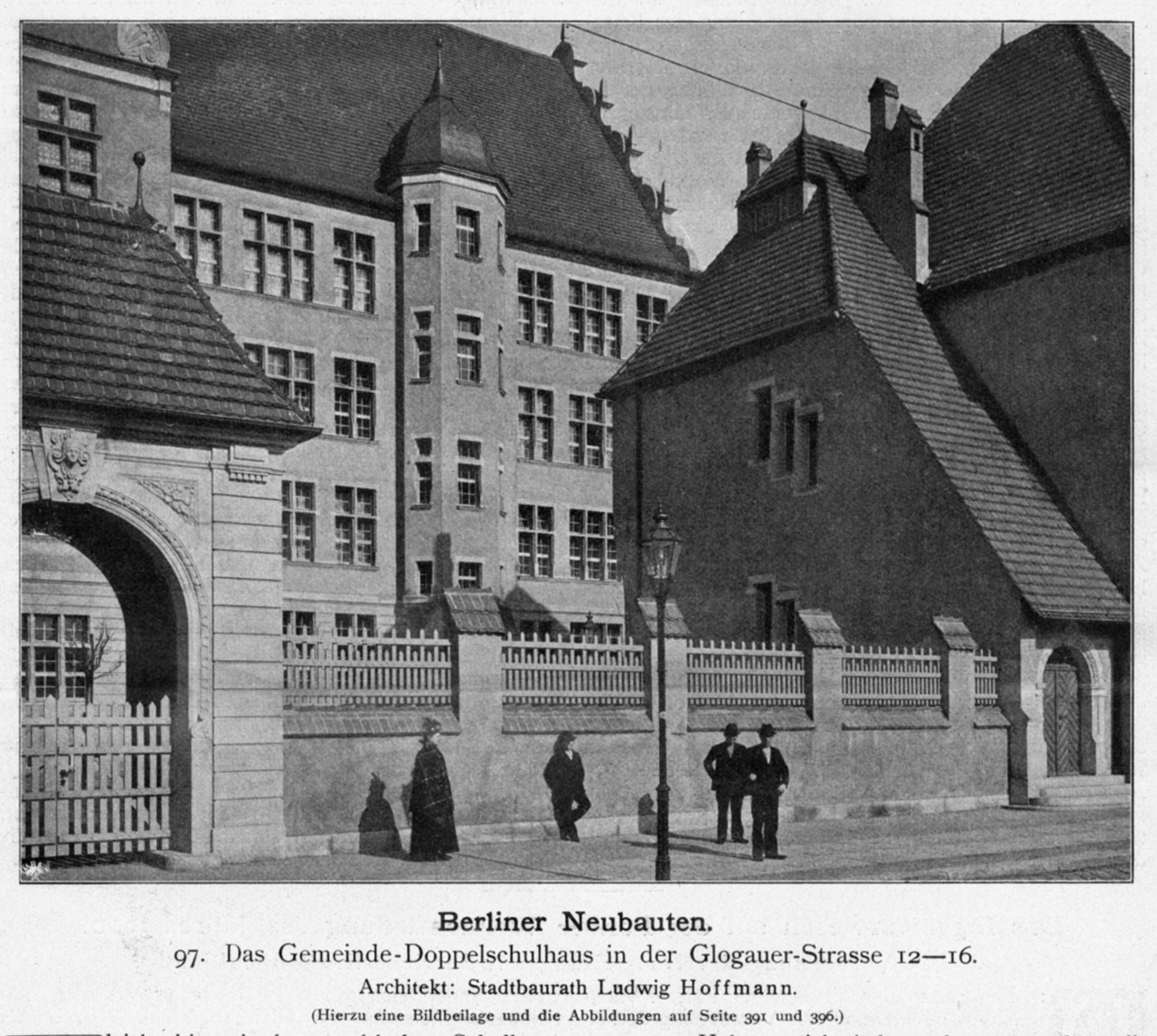 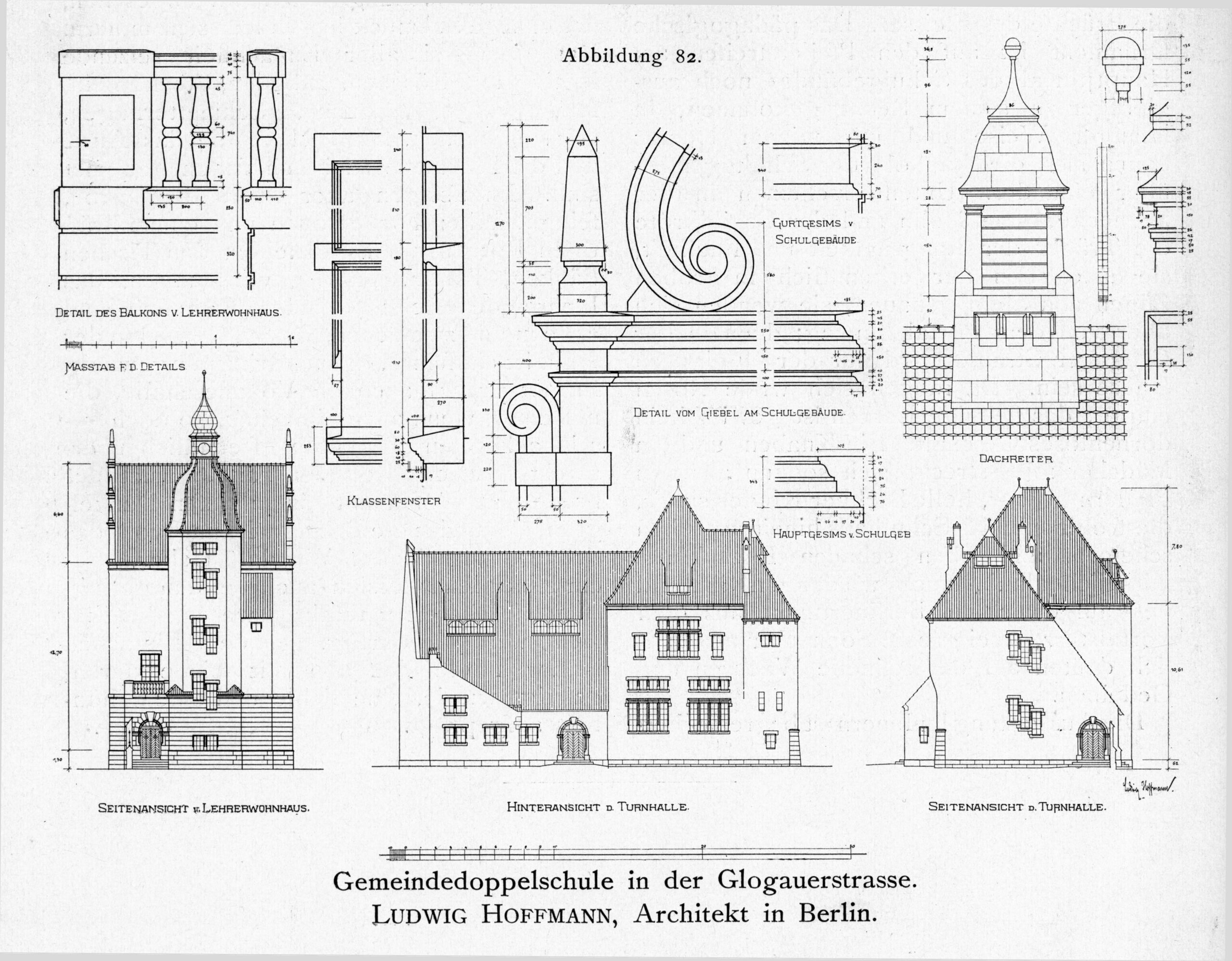 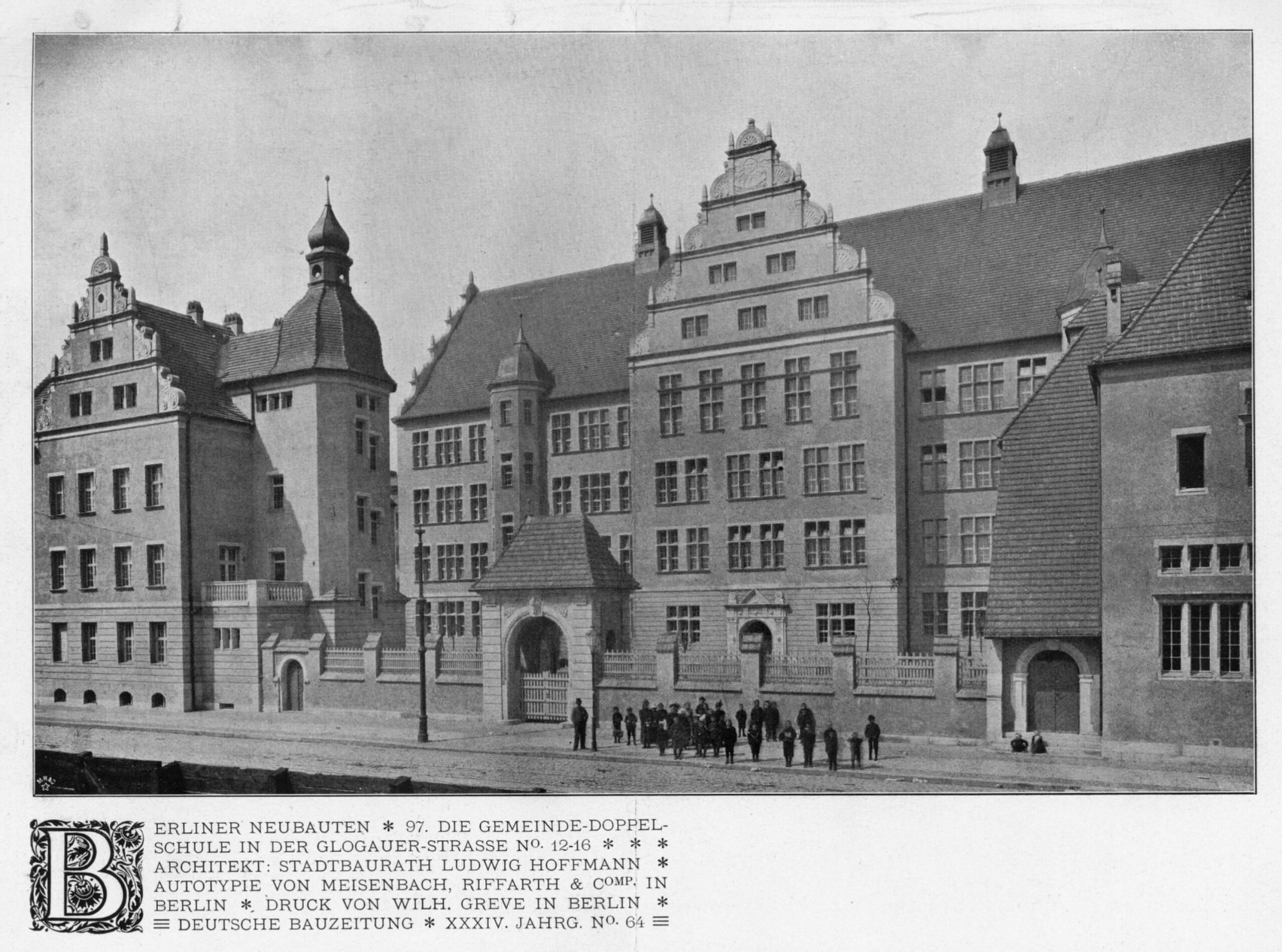 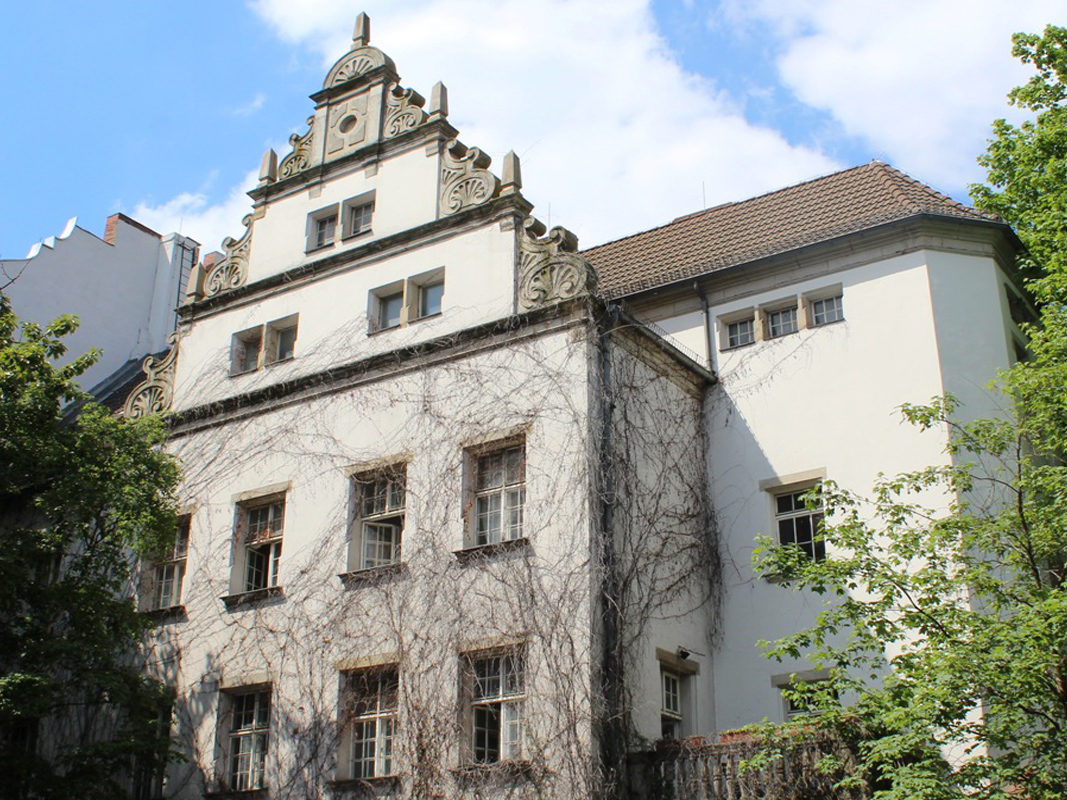 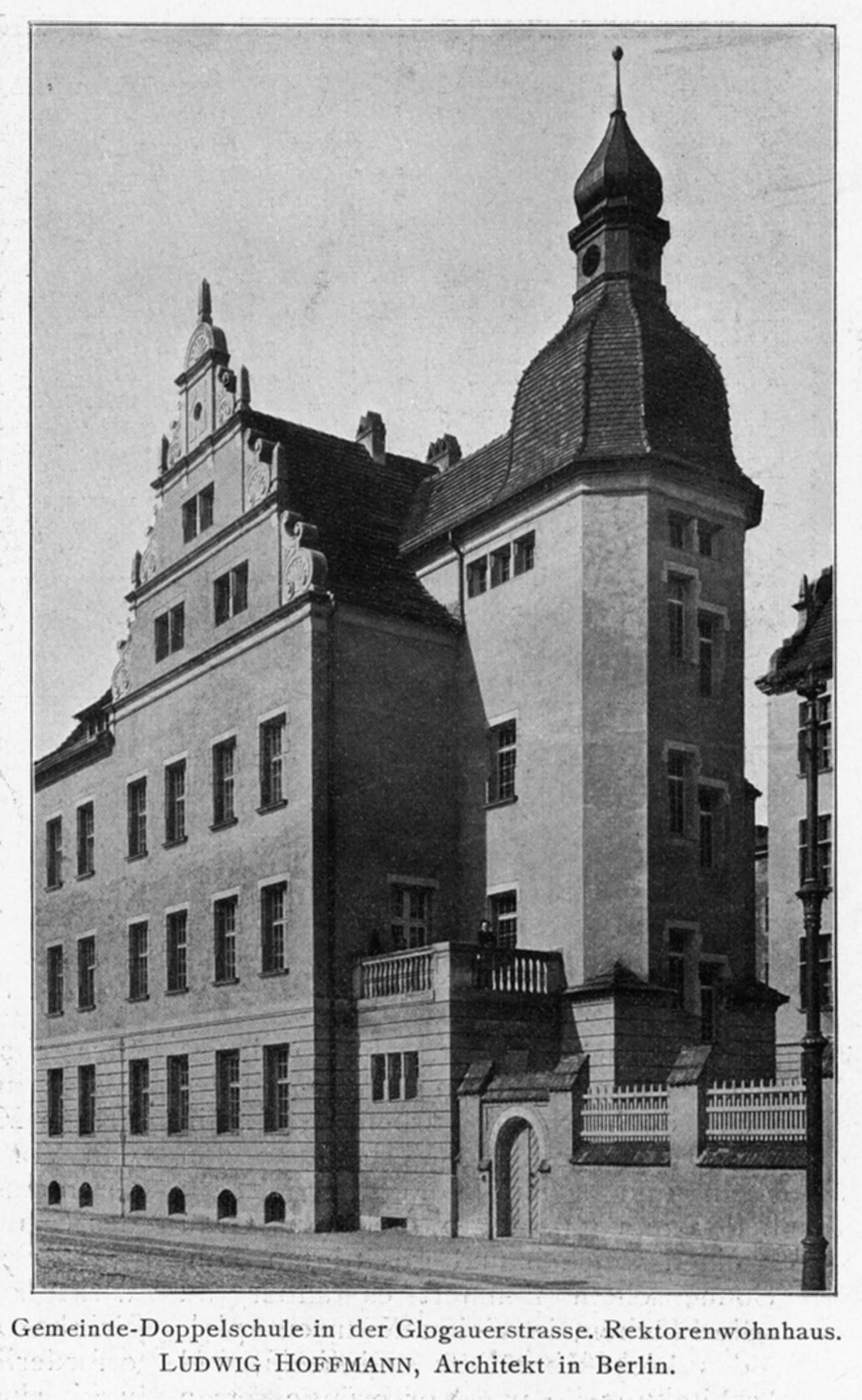 GlogauAIR is situated just off the Landwehr Canal, a picturesque river filled with swans, and lined with trees, which crosses the entirety of the Kreuzberg "Kiez". The very large and central Görlitzer Park is also within immediate walking distance of the GlogauAIR residence.

Historically Kreuzberg, which sits on the western border between East and West Berlin, was characterized as a neighbourhood of elegant buildings housing working and middle class families. It features many industrial enclosures that lodge small factories, publishing and printing houses, and crafts businesses. From the beginning of the 19th century to the end of the Second World War, Kreuzberg was Berlin's central quarter for commerce and production.

After the war, and later with the raising of the Berlin Wall, Kreuzberg became a frontier neighbourhood whose accessible rents and wide open spaces attracted young people from across Germany as well as immigrants, especially from Turkey.

In the 70s and 80s the alternative character of the squat movement - occupying abandoned buildings- flourished along with the arrival of artists from all disciplines, turning the Kreuzberg quarter into the new "cool". It still holds that reputation today; since the Wall fell, it has cemented its status as the creative, multi-cultural heart of the city, a zone that has preserved its essential character while allowing the constant flow and influence of new ideas.