As an artist, a keen interest in history, architecture, music and theory led him to discover sculpture and installation as an ideal means of expression. A wide array of experiences helped this choice during Marcos Kaiser’s formative years, ranging from apprenticeships in musical instrument making to education and practice in mechanics, restoration, carpentry and metalwork. While still studying arts, the artist worked as an assistant for different
artists, slowly but steadily working towards finding his own artistic voice.

The emergence of a mature body of work occurred towards 2014, when the outlines of his main interests were finally envisaged. Since then, an output ranging from sculpture to installation and sound art, privileging themes related to memory, corruption, decay, and time-driven transformation in objects favoured the use of materials burdened or imbued with a symbolical or historical meaning. Materials and sound tend to be used in both abstract and concrete ways: scaled representations of architecture use materials that mimic others while preserving their character at the same time. Sound can be collected or created. A conflicting or contrasting relation with the environment is integral to the work, and therefore desirable.

In general, his artistic process involves mapping and studying the subject, while making and collecting objects, continuously reworked or re-created subsequently in plaster, wood, cement or metal, in a similar way as his writings and engravings, where lines are overlaid and rewritten, until a final statement emerges. During this fine-tuning, several unfinished works are abandoned or destroyed, but Marcos feels confident that the process is of interest to other artists and observers, whom he is always pleased to engage with.

GlogauAIR resident from January 2020 to March 2020

The residency project for GlogauAir takes as a starting point the writings of three German-language authors, whose work dates from the beginning of the 20th century. The project envisaged for the residency relates to the literary description and practical intertwining between the site and the surreal depictions of school classes, educational institutes and blackboards, present in works such as Institute Benjamenta by Robert Walser, Street of Crocodiles by Bruno Schulz, and dreams registered by Franz Kafka in his diaries.

My use of materials is mainly symbolic. As stated in my areas of interest, the transformations inflicted on objects by time, corruption or conceptual shifting are central. The choice of materials also favours those that bring along a historical or symbolic component. Therefore, starting from some passages from Institute Benjamenta, The Street of Crocodiles and the Diaries of Franz Kafka, I would like to establish the title and guiding lines of the project, to be presented in the form of sculptures and an installation, featuring the space of the residency, a former school, and the classrooms, now used as studios.

My previous residency at GlogauAir started with an open project and ended with 3 series of works, whose theme was memory but with each one taking a different approach. In Cliché-Verre, small pieces of microscope glass were coated with smoke and then etched with a needle. The small details of the daily experience, the encounters and mishaps were etched and filed as a diary. In Impressions, architectural details of the place were used as moulds for pressed sheets of lead. The forms were carried away as indexes of the place, much the same as impressions could be understood. In Cabinet of Curiosities, several objects collected during the residency served as a collection, displaying living and dead things, curious objects, either made by men or nature, historical or new. These collections in previous times were regarded as the collector’s vision of things, or the way the world could be understood. Other objects, such as Perpetual Inventory used clockwork from recycled machines to run a perpetual datasheet from weather conditions from a specific day in 1962, found by chance. The musical performance presented at the open studios was devised to use images from both artist’s collections, again, impressions from the residency period, presented with distortion and interpreted live.

Just as the residency site is linked to the open scars of bombed Berlin, the classrooms are related to a past I would like to tap into, with the help of the authors cited in these project outlines. The writings, full of spectres, surreal environments, darkness and dream-like states of mind deserve a long period of study and experimentation, something only truly possible in a residency.

The materials I intend to use are drawing, engraving (on Cliché-Verre technique) Installation with projected images, found objects and sculpture. The final format of the work is yet to be devised, but one of the anticipated images that come to my mind is a presentation of a series of drawings in chalk, on a huge blackboard at the classroom, with erased and new drawings sometimes coexisting, being continuously redrawn, registered, effaced, leaving ghosts of images, as if emulating a black and white film picturing all the interns and teachers of the past, mixed in time.

For the duration of the residency, I would like also to propose some public film projections on site, with a curatorial selection related to this project.

Collective exhibition Is That All There Is? UNIT2 GALLERY. London, UK. 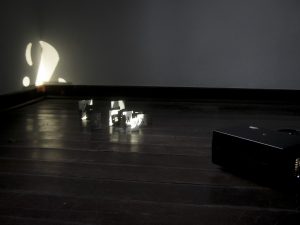 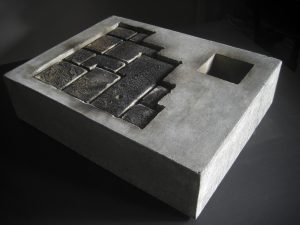 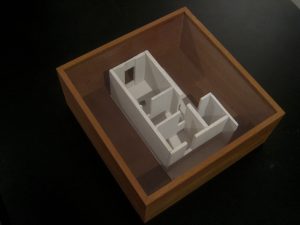 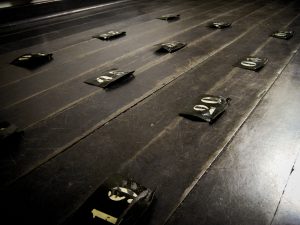 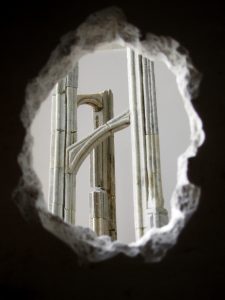 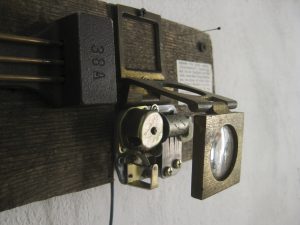